As of this writing, we still find ourselves under… quarantine? I mean, maybe that’s a strong word. We’re allowed to hang out, but not too often, and you should still be careful…

No matter how you would describe the situation, meeting up to play games is still harder than it used to be. So, we want to give you some ideas on options that you have to play games from a distance. We’ve already talked about Board Game Arena, and today, we’re going to go with something that’s not quite board games, but not quite video games, either…

For years, Jackbox Games were best known for their “You Don’t Know Jack!” trivia series, which were a computer game staple for many people in the ‘90s. They even made it into a TV game show starring Pee-Wee Herman. Seriously.

But in recent years, Jackbox Games has released “party packs”, a collection of five or six simple games that are more than just trivia. The games are played from a centralized location – a computer, video game system, or TV streaming devices – and participants use their phones to answer questions, draw doodles, or complete a myriad of other tasks. 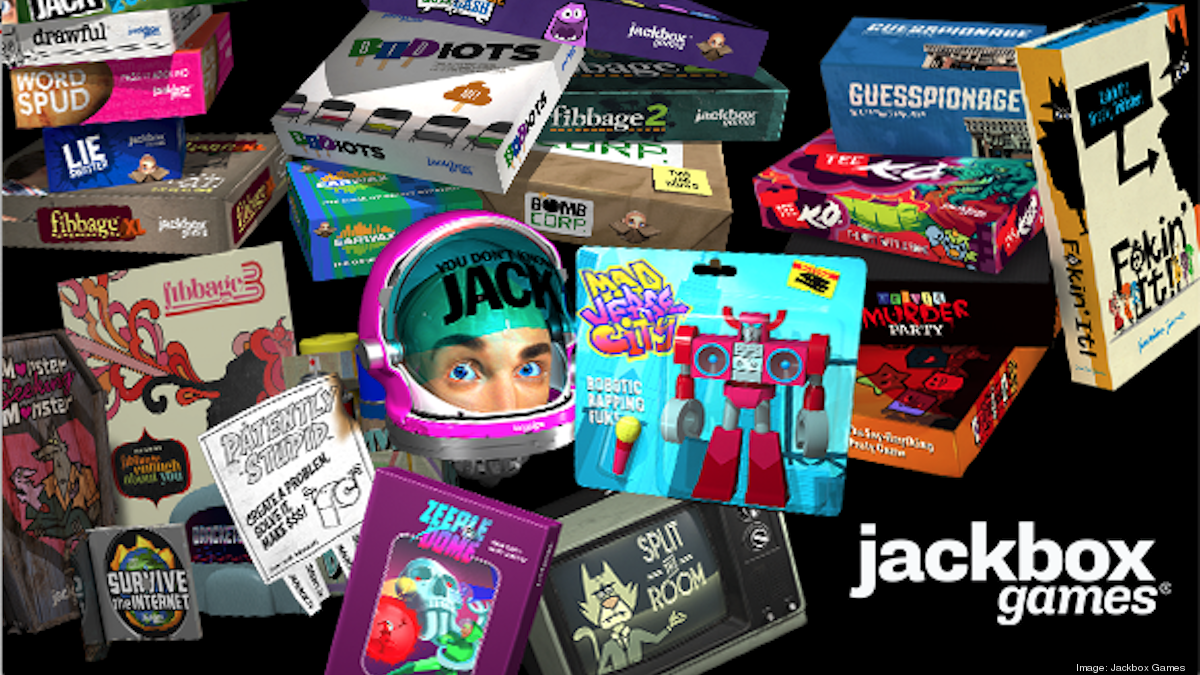 While these games are great to play with a group of friends at home, many people have been using Zoom and other videoconferencing software to play games with their friends and family around the world.

The company has released six packs so far, and they have done us all a favor and discounted the prices of all but the newest pack. But with so many options, it can be hard to select which pack is right for you. To help, here are five games that top our list of fun.

One note: these games, while mostly harmless, do have some crude humor involved from time to time. If you’re looking to play games with children (or probably your grandparents), we would recommend getting some of the later packs of games, as many of the titles include a family filter.

Fibbage is a spin on a classic game that has been reproduced in many forms, most popularly in the game Balderdash. A random fact is presented with one key word or phrase missing, and you must make your best guess as to what that is. All players will enter a guess, and then each player’s guess will be shown, along with the correct answer. Players then try to guess which answer is correct. Those who do so will win points, along with any people you fool with your fake answer. While the previous two entries in the series are perfectly fine, we would recommend this tile because of the inclusion of the Enough About You game mode. This spin on the game makes the questions more personal, allowing for you to identify things like the superhero you most admire or the food you hate the most. This gives you just a little more reason to play the game one more time with your friends before you call it a night.

You really can’t talk about Jackbox Games without talking about their namesake trivia contest. If you’re unfamiliar with the game, you’re in for a treat. It’s a very odd sensation to be answering very particular fact-based questions while laughing your head off. There are many elements to this game that will be familiar to fans: screws, the Dis or Dat, and, of course, the Jack Attack. But there’s new stuff, too, including some slight adjustments to the rules and new question types. Perhaps the biggest addition, though, is the ability for up to eight people to join in on a game. Since all past titles (as far as we know) have limited you to just four participants, this could be a game changer.

You honestly can’t go wrong with any of the YDKJ titles if you’re a trivia fan. But if you want the newest and best, you should go here.

Drawful is a bit like Pictionary if the rules were made by your kooky aunt. Each player is given a weird prompt at the beginning of a round and they must draw their best version of the prompt. Don’t worry about your art skills – everyone’s artwork is terrible when they’re drawing with a finger on a phone. Oh, and one beautiful little detail that makes the game wonderful: you can never erase.

Drawful 2 is probably the better option, if only because you get to use two colors for your drawings. Unfortunately, it’s only available as a stand-alone title. However, you’ll still have a great time with the original. And you’ll also get to find out which of your friends is just so terrible at art.

Jackbox Games are well-known for their humor, and that’s certainly the case for this title. The premise is simple and familiar enough: a question is asked of a group of people, and you must determine what percentage of those asked responded in a particular way. For instance, what percentage of people have mistakenly thought a mannequin was a person? One player guesses a number, while all of the other players guess whether the real answer is higher or lower than that guess. The guesser gets points for being close, while other players get points if their judgment was correct. But the points and winning are only half the fun. The questions are usually about weird but relatable pieces of information. What percent of people have spent more than $10 on lottery tickets at one time? What percentage of people try to close the elevator doors when people are running towards them? Most of the enjoyment comes from numbers that are way different than you expected. You’ll spend most of the time between questions saying “Where did they get this data from? Just cranky old people?”

This is probably my favorite game right now on Jackbox, and I try to include it every time I have friends or family play. It’s so simple to teach, so easy to play, and leads to a bunch of laughs.

If you’re a math nerd like me, then half the fun of March Madness is found in the brackets. I mean, just seeing all the mathematical possibilities laid out in an organized fashion… oh, it’s just wonderful.

Well lucky for the other three of you out there like me, there’s Bracketeering! In this game, players are asked to respond to a prompt. Usually it’s something silly, like “best grandma nickname”. You submit your answer, and then your answers all compete head-to-head to see which is the best answer. Players will get the chance to vote for each match-up to determine which response they like best. Along the way, side bets will provide players with an opportunity to get more points. The first round is pretty straightforward, but the second and third rounds amp up the ridiculousness. In the second, you’ll be doing a blind bracket, in which a vague prompt – like “name an animal” – is given, only to be replaced by something different like “the best animal to be raised by”. In the third round, the prompt changes each time you move up a level in the bracket. So “an odd thing to teach a child” may change into “an odd thing to do in a supermarket”.

The game is one in which the nonsense is limited only by players’ imaginations, and in my time with the game, that’s pretty nonsensical. I also appreciate the over-the-top seriousness of the announcer and the visual effects. It gives the vibe of a sports show that’s trying too hard. While this one may not be everyone’s cup of tea, I must say that I thoroughly enjoy it.