Today we’re talking with one of the creators behind the company Druid City Games. They’re set to publish their very first game called Barnyard Roundup through a very successful Kickstarter campaign that ends in a couple days. The game is bright, fun and an excellent card game of families! Take some time and get to know James and how the hobby of board gaming is bringing his family closer.

Tell us about the role board games and tabletop gaming played in your life growing up.
My family didn’t really play board games when I was a kid. I had a cousin who had Risk and when I would go to his house, we played it a few times. I loved it, but my exposure to the hobby was pretty low.

How have board games helped you connect as a family? What kinds of relationships have you been able to build around tabletop gaming?
Board games have really helped us connect as a family. It’s our “thing”. I use them not only in my family but with friends and at gatherings to get people engaging and interacting. We have a monthly family gathering at my mom’s house. We eat and sit around for a few hours. It was at one time, really boring. We would eat and then everyone would sit around and stare at each other until the first brave person said they needed to go. Then a few years ago when I started bringing board games to the gathering, everything changed. At first, they resisted, but after I insisted, everyone was laughing and having fun. Now it’s the thing they look forward too. Everyone runs over and looks in my game bag to see what I brought.

You are part of Druid City Games. Tell us a little about how this company started and who is a part of it.
The spirit of the company started one day when I came home from work and my family all had their faces in some kind of electronic. I said hi, and they gave me the cordial hi. I only get 3 hours a day with my kids, did I want that time to be with our faces in our electronics like zombies? This is what set me on the mission to get us engaging with each other on a regular basis, it is what started me down the rabbit hole of board games.

Now it’s the thing they look forward too. Everyone runs over and looks in my game bag to see what I brought.

The company branched off from this idea, to help bring families and friends together in a meaningful, dynamic way. There are 3 of us that make up the company. Doug, Ian, and myself. We are just board game nerds with ideas. We want to make games that help people have fun. One of the main questions we repeatedly ask when we are play testing a game or a mechanic, “is this fun?”

Your first Kickstarter is for a game called Barnyard Roundup. What was your inspiration for the game?
We wanted to make a game that had a repeatable, fun mechanic that kids and parents could enjoy together. If you have played some of the old classics, some of them feel more like work than fun when playing with kids. This was our inspiration, could we make a game that didn’t feel like a job to play with kids, that we actually enjoyed as well. All three of us love the bluffing mechanic. We all three love the Princess Bride and if you have seen the “Battle of Wits”, with the poison in the cups, then you have a good idea how our game will work. The game is less about bluffing and more about out-witting your friends. Lance with Undead Viking did a great job of explaining the strategy in his review video. 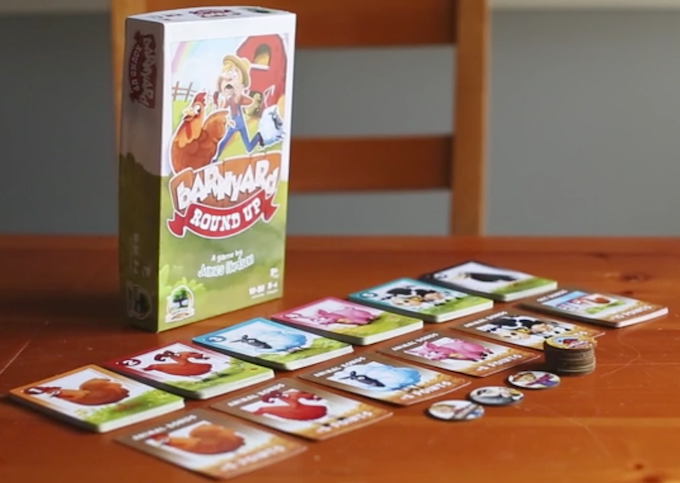 Barnyard Roundup was funded in under 24 hours via Kickstarter. What was your family’s reaction when finding out the game had reached its initial goal?
We were really excited! We still are! We want to hit all the stretch goals and make the game the very best it can be. We haven’t really taken the time to celebrate yet, there is so much work that goes into a successful Kickstarter campaign, once it ends, that is probably when we will celebrate and take a deep breath.

What type of gamers will be attracted to Barnyard Roundup?
We would like to think all type of gamers, but we aren’t naive. I would ask all gamers to give it a shot, it might surprise you. We have had hundreds of demos at cons, people walk up and see the childish art and say, “Nah, no thanks”, then I ask them to give it a try, its only 10 minutes. I have converted them all except a handful.

As a company, what can we expect to see from Druid City Games over the next 12 months or so?
We have a follow-up to Barnyard we have about 75% done right now. It’s working title is Guardian’s Call. It is what Barnyard would have been if it was solely targeted at gamers. It is fantasy-themed and you are collecting warriors for your army to conquer foes and collecting loot and gold. It uses the bluffing mechanic, like Barnyard, but in a more sophisticated way.

I only get 3 hours a day with my kids, did I want that time to be with our faces in our electronics like zombies?

The strategy and actions are more complex and have more depth. Pretty much every idea we had while making Barnyard that wouldn’t work in a family environment, we rolled over into this and made a gamer’s game. We are really excited about this game!

From there, we have two or three other games that we are working on next. We are also looking at taking submissions from designers to produce their games under our name. We are ready to bust on the scene as a real player.

As a gamer with a family, our game shelves are usually a hodgepodge of deep, serious games and light, fun games. What are two games that make it to the table during an adult game night and two games that hit the table when playing with the kids?
Two games that make it to adult time are Blood Rage and Orleans. We are a good mix of Ameritrash and Euro lovers, so we never really focus on one game type. Two games with the kids, we play a lot of Batman Love Letter and New York 1901. My 7 year old loves both of those games.