Deck building games have really taken off in the last few years, and it’s easy to see why. Players get to have control over their deck, allowing for individualized strategies. With so many cards, you’ll generally have a different gaming experience each time because of the randomness of what you draw. With the addition of licensing, companies can squeeze in different elements from your favorite TV show, movie, or comic into the game because they’ve got so many cards to fill. But in a genre that’s become so crowded, how can a game stand out? 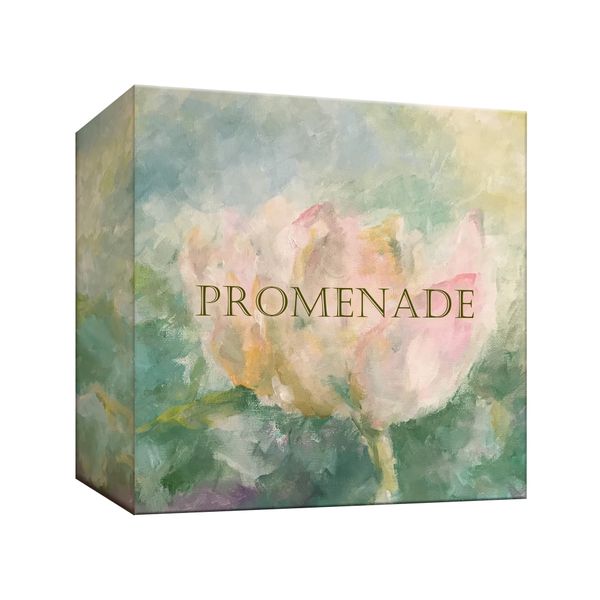 Promenade seeks to make a name for itself with two major elements: great artwork and mechanics that address some of the major issues seen in many deck building games. The end result is a very solid game that I believe many gamers would enjoy.

Promenade places you in the role of art dealers, seeking to acquire different works, manipulate their market value, and put them on display in museums. Players take these actions using cards from their own hands, which include money and paintings. New paintings are purchased from galleries. Players also have money cards that can also provide bonuses, like allowing you to draw more cards. Some of the money cards can also be worth more if they are ‘trashed’ and removed from the game at the end of the turn.

Points are scored based on the end game value of the paintings you have acquired, which is manipulated by how many of each type have been purchased over the course of the game. Players also earn points for the paintings they have put on display in the center of the board, with earlier displays being worth more points than later ones. When one of three end game conditions is met, the player with the most points wins!

So all in all, many of the elements are similar to any other deck builder: start with some cards, get more cards, score some victory points. But there are a few key elements to the game that make it stand out.

More Than a Pretty Picture

First off, I really enjoy the artwork. All of it was created by the game designer, Ta-Te Wu. There is an impressive amount of variety here, and players will really appreciate the work that has gone into the creation of the cards.

More importantly, though, are the mechanics that have been added in order to battle against some of the major issues I’ve had with deck building games. First, deck management. When you play a deck builder, you usually start with a small set of relatively weak cards that allow you to get lower level cards, and then you gradually build up to more expensive, higher level cards that are more powerful. While this seems to make sense, it does result in some unbalanced play for those who have a few bad draws or maybe have less experience with the game.

Promenade’s approach to deck building is different. There are some currency cards that you can purchase, but you’re mostly purchasing painting cards from one of the galleries. If a gallery is emptied on a turn – which the cheapest one often will – then its price increases for the next round, generally making it more expensive than all the others.

Victory point cards have different roles in many games, but usually, it’s not that great. In Dominion, they often just take up space, and in games like Paperback, they’re simply a wild card. However, painting cards not only serve as the primary way to get victory points, but they’re also currency. All of the paintings start of at a value of 1, but over time their value increases.

How? Well, whenever you decide to exhibit a painting in a museum, not only will you get victory points, but you’ll also improve the value of that genre of painting. If you’re able to focus on one genre, you may drastically increase the value of your deck. However, acquiring cards just in one genre can be very expensive, and you may find it more beneficial to just get whatever painting you can get at the cheapest price.

In the end, I guess Promenade is a bit of an economics engine deck builder. And what I’ve found in the several hours I’ve spent trying to word this preview just right is that it’s hard to explain how well the game is balanced. I believe some people may pass just looking at the artwork – while it’s well done, I could see how it won’t be some people’s cup of tea. But what they’re missing out on is a very good game that really is a lot of fun.

Back in the day, I used to buy so many DVDs, and I still have a big bookshelf full of them. In reality, I really only watch superhero movies and cartoons because, well, I’m an adult. But a movie that I watch on a fairly regular basis is School of Rock. It’s not the greatest movie in the world, and it’s not what I would recommend if anyone ever asks what we should watch. But when I’m in the mood, School of Rock really hits the spot and makes me happy. I think Promenade is like the board game version of School of Rock for me. I’m not going to play it all the time. I’m not going to recommend it with everyone. But from time to time, it’s going to catch my eye, and it’ll hit the table, and I’ll be happy. 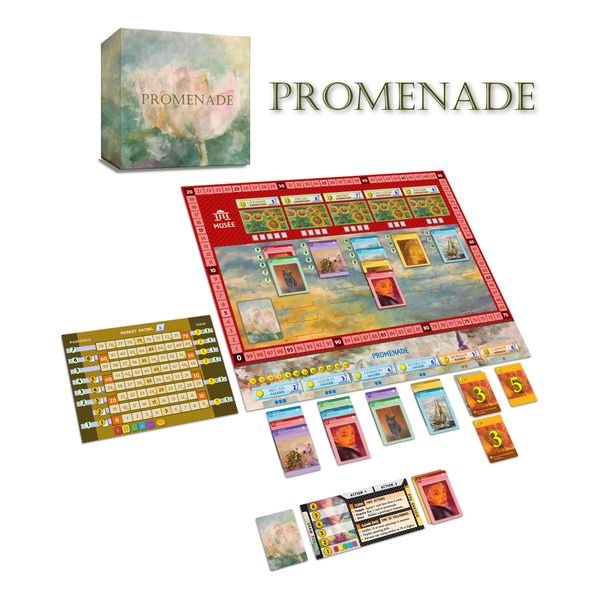 Promenade is live on Kickstarter until May 13, 2019. Back it today to help bring this game to life and to get your very own copy!

The creator of the game provided us with a free preview copy of the game. This in no way influenced our opinion of the game. Previews are a glimpse into an upcoming game with the pros and cons that we experienced prior to production of the game.