Most people have a love/hate relationship with trivia games, and your feelings generally relate to how well you do with trivia. If you are one of those people (like me) that has 31% of your brain space dedicated to completely obscure knowledge, you revel in the opportunity to show off those skills, no matter how unimpressive it is to everyone else. If your brain is being put to use for much better purposes, then you probably get tired of trivia games very quickly.

More than likely, Trivial Pursuit is what you’re most familiar with when it comes to trivia board games, and while it definitely serves its purpose, it does very little to persuade people who don’t already like trivia games to try them out. Here, we’ll give you a few games that put a different spin on the trivia genre that will encourage everyone at the table to have a good time.

You know what your trivia game needs? Gambling.

North Star Games introduced us to the original Wits & Wagers back in 2005, but I think that they have improved the formula with the Party Edition that was released in 2012. In this game, players will be asked ridiculously hard questions with numerical answers. But it’s okay! You see, the questions are so hard, that it is unlikely that anyone at the table will know the right answer, but most people will have some sort of guess. So expect questions like “How tall was the tallest giraffe ever recorded?” or “How many licks does it really take to get to the center of a Tootsie pop?”

Players will all write their answers on small dry erase boards and put them face down on the Vegas-inspired player mat. Once all players have answered, the cards are flipped over and arranged from least to greatest. Players then place their two betting tokens on the answer or answers that they believe are the closest without going over. The answer is revealed, and those who wagered on the right answer will receive a payout. This continues through seven rounds, and the person with the most money at the end wins!

The obscurity of the questions may seem like a bummer, but it’s actually what makes the game. Like I said, it is rare that anyone will ever really know the answer, so everyone is just putting out their best guess. Then, even if you had no idea with your guess, you don’t have to wager on your own answer, so you still have a chance of winning money. It’s a format that allows those who normally perform poorly in trivia games to fully engage. In addition, those who may be overconfident in their trivia skills (like, unfortunately, me) will often be brought down a notch because they will trust in their own answers too often.

I believe that this game works for a variety of gamers, including younger players, though they may not know some of the references that are made. There is a ‘family edition’ available, so you might like to try that out with little ones. Either way, this game is a great way for you to have some fun while learning a little something, too.

Publisher: Asmodee
Number of Players: 4 – unlimited
Play Time: ~15 minutes
MSRP: $14.99
Purchase one of the many varieties on Amazon

This next recommendation almost seems more like a learning experience than a gaming experience. In Timeline, you are given a hand of cards that feature an item from the category of the version you are playing. The original, for example, features inventions, but there are versions that feature music & cinema, American history, and more.

The game begins with one card in the middle of the table to begin the timeline. On a player’s turn, they place one of their cards into what they believe is the correct place on the timeline, then they flip the card over to see the date that corresponds to that particular card. So, for example, you might place a card for the record player after a card that represents the cotton gin but before one that represents the light bulb if you think that is where it properly fits (it might – it depends on who you consider to have been the inventor of the light bulb – but that’s a discussion for a later time).

The idea behind this game is very basic, and that makes it incredibly approachable for players. You’ll know how to play within about 10 seconds, and depending on the number of players, you’ll probably be able to crank out a few games during a session. As I mentioned, there are several different varieties, and they can be combined together to customize the experience so that as many people as possible can find a topic of interest in the game. There’s even a version that features a mixture of several different topics, and it would be our recommendation for where to get started.

The Cardline series plays very similarly, but instead of focusing on years, it focuses on facts about things like animals or countries. Instead of just one fact, though, these cards all feature the same three or four statistics. For the animals, for instance, the cards all display the animal’s average length, weight, and lifespan. This addition provides a little more replayability, as you will select only one of the statistics to focus on in each game. The animal version really sticks out for me, as it gives me nostalgia for the Wildlife Fact-Files that I used to collect as a kid.

The artwork and subject matter for this game suggest that is intended for younger players, but I have had a great time whenever this game gets to the table. With so many different options, I’m sure you’ll find a version that works for your gaming group.

This game plays like a mix between light trivia and a puzzle. On each card in the game there are four little questions. These are more simple than your standard trivia fare, but that’s okay, because knowing those answers isn’t the point. In fact, you need to keep those answers quietly to yourself. 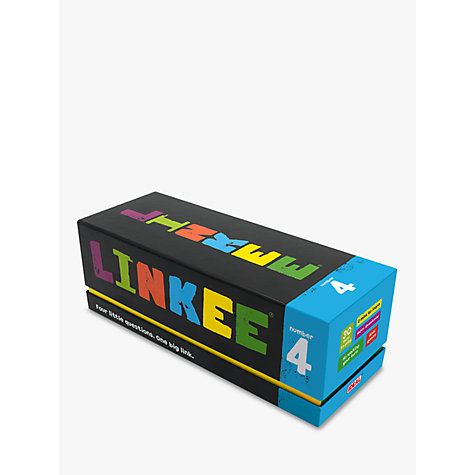 You see, the REAL challenge is to figure out what the answers to those four questions all have in common. So, for instance, I may ask you these questions (which I’m making up right now so I apologize if they’re crazy):

By now, you might realize that the link between all of these questions is ‘condiments’. And if you were the first person to shout this out, you win the card. Each card has one of the letters from the word ‘Linkee’ on it, and whoever is able to spell the word out first wins the game.

The game is not aimed at those who take their trivia seriously. Instead, it’s for people who want to think a little bit differently with their questions, and laugh at the witty questions and connections of the game. As with many trivia games, younger gamers may not know the references of some of the questions, and that could prevent them from successfully playing. However, I believe they could still have a good time in a team setting with adult players. No matter who you play with, I think Linkee is a nice game to break out next time you have a big group over.

These are some of our “must own” trivia inspired games. Did we miss one of your favorites? Let us know in the comments below!