Just because a box says “2 – 6 players” doesn’t always mean that it’s fun with that range of players. It can be hard to sort through the massive amount of games that say they can be played with as few as two players. In this post I’m teaming up with my board game loving friend Ric White to share some thoughts on two player games that keep us and our wives gaming together.

The games listed here are just the tip of a giant iceberg of awesomeness. So here are five games that we’d recommend that you check out for your table of two.

Ric: The board and card game community can be a crazy place. There are tens of thousands of games out there, and you often hear whispers about games at a meetup, or with your other friends, or in passing on a review site. Jaipur was one of those games for me. Recently at a board game meetup, someone suggested that we play, so I obliged. Twenty minutes later, I stood up from the table with an addiction. 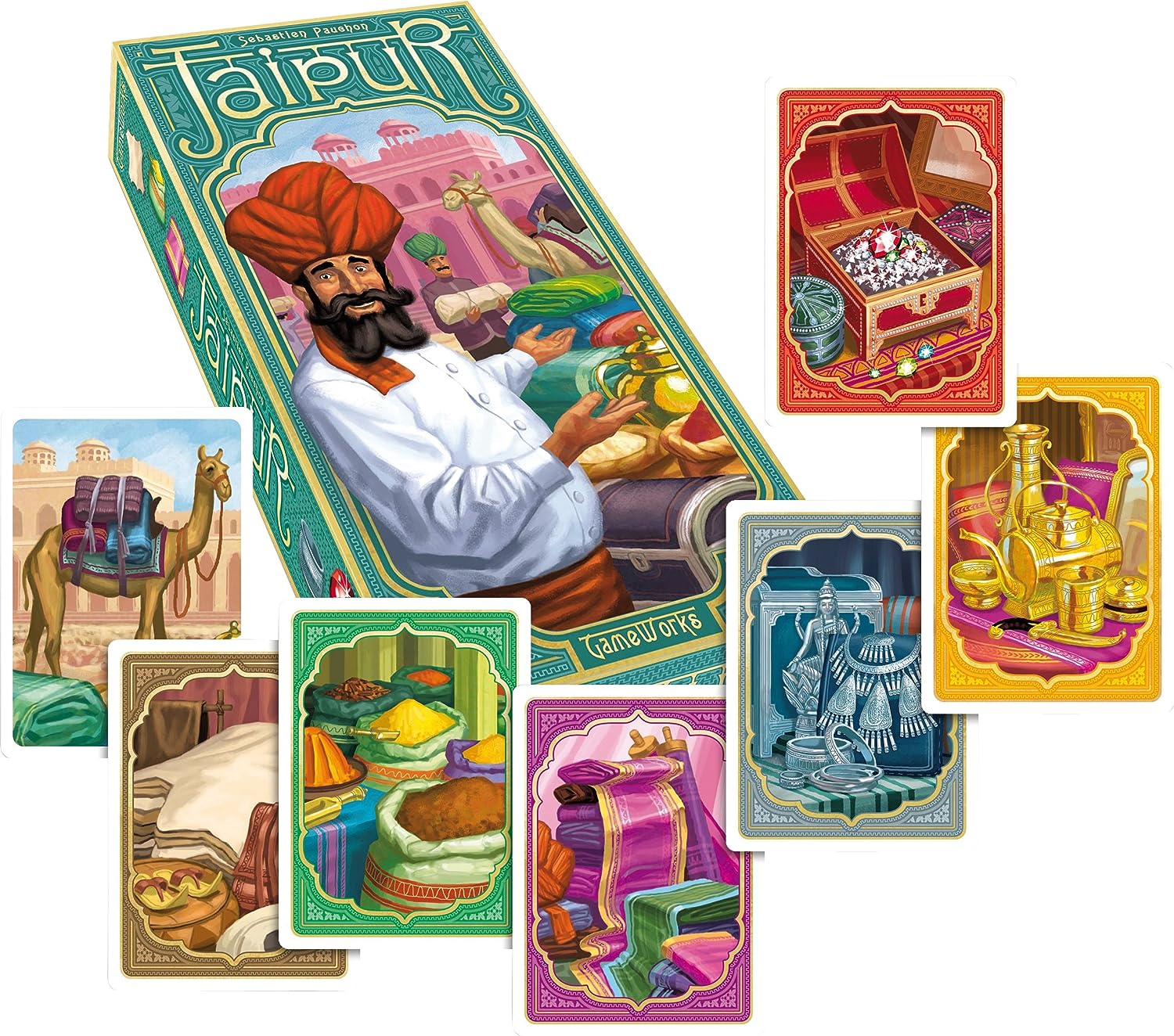 Jaipur is a basic card game with very few rules and very few actions. You are trying to collect goods of the same type and sell them to the market. On your turn, you either take a card, take a lot of cards (and replace them with cards from your hand), or you take a bunch of camels. Yes, that’s right, this game has camels. Automatic bonus points.

When you sell your goods, you get coins that match that good equal to how many of the good you sold. The sooner you sell, the higher value the coins are. However, you also get bonus points if you sell bigger groups of cards. This mechanic, though simple, is glorious. Each turn, you’re plagued with what to do. Do you go ahead and cash in, or hope that another card in the set shows up soon? Do you go for the more valuable goods that your opponent might go for, or do you just try to quickly get points by scoring on the cheaper goods? Or do you just forget all strategy and pick up as many camels as possible? (Be careful… they spit.)

Jaipur plays quickly, it has enough strategy to keep you interested, but not so much that you feel overwhelmed. I plan to get this game ASAP, and I am sure it will make it to the table quite often.

Tsuro: The Game of the Path

Ryan: Planning ahead is the name of the game in Tsuro. This game is a simple game that plays in about 15 minutes and is actually pretty fun with only two players. Each player uses a token to move along curving, straight or spiraling paths that are played by turn by turn. The 6 x 6 board has a beautiful Asian inspired theme. Each player has three tiles in their hand and must choose one to play on their turn. Playing tiles get tricky because you lose when your path leads off the edge of the board.

There are a couple reasons why this 2 to 8 player game works well with two people. It requires you to take every move seriously. After the first couple turns, the board begins to fill with paths that branch in every direction. Placing the wrong tile will put you on a path leading directly off the board. Players can make strategic decisions to cross paths with the other player and cause chaos.

The gameplay is quick and you can fit multiple games into just half an hour. With two players, Tsuro can be strategic. As you add more players, the game gets chaotic and players start dropping off after a couple turns. The game has a great range and is surprisingly good with just two players!

Ric: I’ve played the follow-up to this game, Tsuro of the Seas, and while I like it, I think the additions to its mechanics take away from the elegant simplicity of Tsuro. In the Seas version, you have to consider dragons, which move around on each turn, so your plan may get messed up simply due to luck. That’s not something you want to see in your strategy game. That’s not to say it’s not fun… it’s just to say that if you’re going to purchase only one version, get the original.

Ric: Do you remember Tetris? That game that made you feel like a genius, until everything started going poorly and the bricks started stacking up and your blood pressure started to rise and the music sped up and you just want the straight line block and it never came up and…. Well, you know what I mean. Patchwork is a game that might happen if Tetris went to hang out with your grandma for a while.

The main mechanic of the game involves quite a bit of strategy as you try to fit the pieces you purchase into your game board. You’ll make choices each and every turn. Do you go for the bigger piece to fill up more of your board, or do you get the piece with the button so that you get more income in the future? Or do you just pass your turn and hope you can get an even better piece down the line, and maybe pick up the one square on the way? That all might sound like nonsense if you haven’t played the game, but it’s what will go through your head every single turn. There’s also the geometric element. Being able to visualize how your pieces will fit together takes some serious concentration, and when you finally get that PERFECT piece… well, that’s a moment of board game gloriousness.

All of this strategy could be a bit of a turnoff for some players, and that’s where the wonderful theme comes in. My wife isn’t big into games that require thinking several moves ahead and considering every possibility, but she certainly loves crafts. When I first told her that this was a game about putting together a quilt, she essentially let me open the budget a bit more to get it. We have played through a few times, and while she’s never happy with her final result, she’s still willing to play with me each time I ask. It’s those buttons, man… Patchwork plays fairly quickly, though it does take a decent amount of time to set up.

Another note: this game takes up A LOT more room than you would expect. As in sometimes we struggle to squeeze it onto a normal kitchen table. But this game is so good, you’ll sell the table and just play on the floor if you have to.

Ryan: Forbidden Island was one of the first co-op games that we added to our game library. A friend picked it up for us around Christmas years ago, knowing how much we loved new tabletop games. Forbidden Island puts 2 to 4 players on a fictitious island that is sinking. The players are tasked with the job of retrieving 4 artifacts from the island and taking off from the helicopter pad before drowning.

This game works so well as a 2 player experience for a couple reasons. Both players have to really work together and sync up to collect all the artifacts that are scattered around the island. Being efficient with every action really matters. Because of the random nature of the tiles that are placed at the beginning of the game, you have to work out a plan to beat the game board before the island sinks. I love that you can set the difficulty of the game at the start by raising the “Waters Rise” marker. As the two of you get better at the game, you can ramp up the difficulty and see how far you get as a team.

I love co-op games because players are working so hard to complete a task or work toward a goal together. As crushing as it can be to lose, you end up talking about what went wrong long after that game has passed. Our family is a huge fan of Forbidden Island and its follow-up game Forbidden Desert.

Ric: Two player co-op games are few and far between. When it’s just you and the significant other, sometimes a head-to-head game isn’t what you need. I mean, you already had that fight about the dishes and the electric bill and the grass needing to be cut. Why possibly cause more strife? This game is a great choice in those situations.

With a co-op game, you have to ramp up the challenge, while also keeping the game accessible so that it doesn’t become a night of watching the experienced player tell everyone what to do. Forbidden Island does a great job creating a sense of urgency throughout the game, and the rules are simple enough so that everyone feels that they have something to contribute.

Ryan: This game is the only game on our list that is exclusively for two players. One player takes on the role of a team of scientists while the other player is in control of a mother Velociraptor and her babies. There is so much to love about this game from the setting to the mechanics to the balanced gameplay. We recently took time to review Raptor because we loved it so much!

There is a lot of strategy in this game and both sides have multiple ways to win. The board is set up using a 3 x 2 grid that is different every time and this causes you to change up how you play. It’s hard to not recommend Raptor for any couples that enjoy strategy games. Unlike Forbidden Island, this is definitely a competitive game. Sometimes you have to get ruthless to come out on top.

The game takes around 30 minutes after you get used to the game mechanics. The first couple games will leave you saying “If I had just…”. Our friends Jordan and Courtney played a couple games and had this to say about it:

Raptor is one of the most balanced 2 player games that we have played. The learning curve is not that hard, but to really learn how to have a good strategy takes at least 3-4 games. It is fun that you can switch teams and it really changes up the gameplay. The game is great, but there is one flaw with the game. If the players are not on pretty equal level of skill with enjoying strategy games, then it may not be a fun experience for both players.

Ric: I know next to nothing about this game. However, I’m having trouble thinking of a scenario where it’s not good, simply based on box art and pictures. Am I hunting dinosaurs? Am I hunting humans? Are we trying to tame the dinosaurs so that we can ride them? I’m down for all those game scenarios. Whatever the situation, I know that I would definitely house rule it to where you could only play this game with T-Rex arms.

We will be featuring even more two player games in future posts. Until then, what are your favorite games to play at your table for two? Post them in the comments below and introduce us to something new!