The creepiest month of the year is upon us! No, not TV premiere season where Ryan Seacrest introduces us to yet another show that we don’t need. It’s the month of October! A month where everything is filled with fake pumpkin flavor and we prepare for my favorite holiday, Halloween.

In this post, we want to share some fun and spooky themed games that will be perfect for your game night as we near Halloween. In this first of two blogs, we are sharing games that are great for your family gaming sessions. These are family-friendly games that our kids love to play and should be a good fit for a family game night this month. 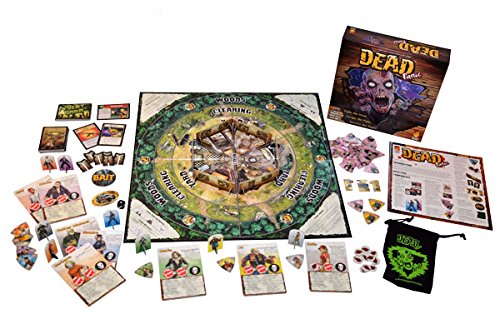 Castle Panic is a game that our family has only recently taken time to play but it’s been around for years. This is a co-op game that has players working together to defeat hoards of attackers that want to bring down your castle. Up to 6 players trade and play cards to defend the castle as a team. Dead Panic is a great edition of this same game that adds some additional strategy and the ability to come back as a zombie when your character dies. In Dead Panic, you are defending a cabin instead of the castle that is in the original version. The art and theme may be too much for younger kids but it’s just right for those around 10+. With adults and kids playing together, you can coach the kids and get them to understand how their turn can be the most effective. This can be a great game for families to work together and have fun defeating hoards of orcs or zombies.

Ric White: It doesn’t get much simpler than Zombie Dice. Roll ‘em. Try to get the brains, try to avoid the shotguns. With something so simple, you may think it would become boring very quick. No! Zombie Dice is one of those games that you’re able to play almost mindlessly while talking or watching a movie. Before you know it, you’ve been playing for an hour, and no one has a problem with that. Plus, it’s like 10 bucks. So just go ahead and get it.

Spot It! is so well known that you can find a different edition for anything you like. Do you like baseball? They have an edition for you. How about Disney characters? They have one for that too! This is a super kid friendly game that challenges players to find specific items on round cards that get flipped to the center of the table. The game is inexpensive, fast-paced and very portable. Bring Halloween Spot It! to the table after dinner and you’re sure to have a good time.

Last year our family found a pretty great little card game called Dead Fellas. Each player is given 3 zombie gangsters and a hand of cards. You have to outfit your gangsters with a vehicle, weapon and disguise before you can “wack” another players gangster. Players can steal items from other gangsters and killing another player means that you’ll have to part with a piece of equipment. The game is cutthroat, easy to learn and feeds that need for another zombie themed game. Our youngest daughter has loved this game since the first time it hit the table. It’s hard not to laugh when a zombie riding a unicycle, wearing a french maids outfit takes out a player with a bazooka.

Our family has had some great times with King of Tokyo over the past couple months. Even though this isn’t a Halloween game, it is all about monsters. What is more creepy than monsters attacking the city of Tokyo? Players play as one of 6 monsters that are trying to be the first one to hit 20 victory points. There are “press your luck” elements and upgrades that you can purchase with energy tokens. The game is fantastic for kids and adults and can support up to 6 players. This past Summer, IELLO games published the second edition of the game and there is even a Halloween expansion that can be purchased for the game. If you’re looking for a fun family game, King of Tokyo belongs on your table.

Check out King of Tokyo Second Edition on Amazon today

Can your team make it out of the building alive or will you be taken over by those cute little ghosts that keep popping up every turn? Up to 4 players are tasked with removing EPD’s from the Mercato Building as ghosts haunt all the rooms around you. This is a reskinned edition of the German game Ghost Fightin’ Treasure Hunters and has been a blast for our family. The kids love playing it and with the advanced rules, the game has brought adults to their knees. Fighting ghosts during the month of October sounds like a great plan. You can check out the full review for this game here.

The game of Munchkin from Steve Jackson Games comes in so many varieties that it’s a perfect choice to hit the table in the month of October. Our family owns Munchkin Zombies where each player takes on the role of zombies that are defeating those pesky humans that just want to ruin our fun. There are tons of zombie jokes and fun art just like any of the Munchkin games. If zombies aren’t your thing, you can also check out Munchkin Bites which is a vampire themed version or the Nightmare Before Christmas version that has so many great references to the movie. Our oldest daughter is a huge fan of Jack, Sally and everything about this Halloween classic.

Ric White: So I only played this once, but boy was it a great time. In Fearsome Floors, you play as a team of four characters which look eerily similar to some of the folks from your favorite TV shows (Addams Family, Scooby Doo, and more). You are all trying to escape a dungeon… or a basement… or whatever. Each turn, you’re allowed a certain number of movement points, depending on the character. Now it would be easy to just pick the fastest way to go, but hold on! There’s also a monster! And the floor is littered with movable boulders! And there’s slime! You’ll need to predict the movements of other players and the monster, avoid the obstacles, and escape before 14 rounds are over, or you lose!

This game is just goofy enough to have you laughing quite a bit, but also deep enough that you can really get into planning out each one of your moves. A little fun bonus is that you build your own little monster out of tiny cardboard arms, heads, and body options. So while one round you might want to stick with good ol’ Frankenstein, perhaps the next you want a blob monster with a skull head and zombie arms. It’s up to you!

This game had been sold out for a long time, but at the time of this writing I noticed that Amazon had a few up for sale at around $35. It’s not as cheap as some of the other options, but I think it’s going to be one that you’ll find yourself breaking out every Halloween, if not more often.