Your professors are tough critics and only the best robots will make the grade. Each player is put in charge of building a giant robot that meets the grading criteria of 5 different professors. This set collecting game contains 30 unique limb cards that allow players to create crazy colorful robots.

Robottery 101 starts each game with 5 professors that are drawn from a deck of 15 cards. Each professor grades using different criteria and have preferences in case two players tie. One professor is looking for a robot with 2 identical arms while another is looking for a robot without a single green body part. The professors are worth different amounts of points based on the number of gears represented on the cards.

The Nuts and Bolts

In each of the 8 rounds of the game, players are able to choose two body part cards from one of 4 different planets on the table. The cards have two characteristics, color and body part. Each limb is made of 3 different parts that can be different colors or all one color combination. Understanding what each professor is looking for is necessary to building a robot that will score the most points.

Limbs are built in order using an upper part, lower part and hand or foot in that order. Players can also keep up to 5 body parts in their inventory to use later. We found that Robottery 101 got pretty competitive when players were working toward winning over a specific professor. Putting a head on your robot torso will give you extra points that you may need to out score the other players.

During the 8 rounds of the game, every other round ends with a time called “Study Group”. During this time, players can trade parts or make deals with other players at the table for the parts they need. I found myself taking a part or two that I couldn’t use just to have leverage in trading with other players. I really looked forward to these “Study Group” rounds because the game can have a cooperative feel when you realize you need the parts from another player.

During these “Study Group” rounds, you have the option to sabotage another opponent. In round 2, rolling a 2 through 8 on an 8-sided dice will allow you to forcibly swap a piece on another players robot. In round 4 your odds change to rolling a 4 through 8 and in round 6 you have to roll a 6 through 8. This mechanic was a lot of fun. Using this sabotage feature at the right time can really mess with another players progress. But, if you wait too long, your odds drastically change. In the final round you can only sabotage another player by rolling an 8. 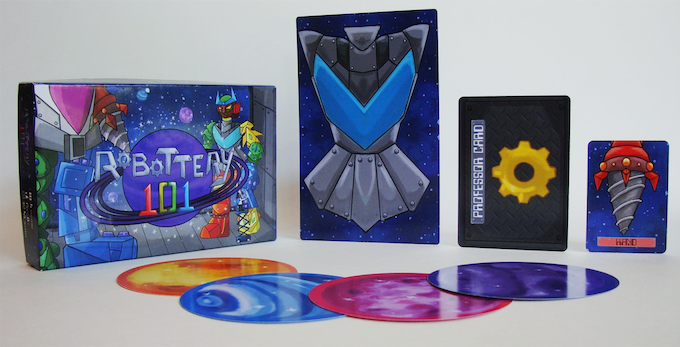 What Did We Think?

This game has some really great things going for it. When we played, everyone stayed engaged because they were looking around to see what parts other players were collecting. The game moves fast and the mechanics make sense. At times we found that the game wasn’t very forgiving when you didn’t plan ahead. You can never discard an inventory card which forces you to attach the card to your robot or trade it away to make space. I feel like this forces players to really make good decisions and not just collect cards just to have options.

The professor cards were tough to understand during our first game but the glossary in the rule book made things clear. One of my biggest problems is that too many professor cards seem to be too similar. In one game we played, 3 of the 5 professors were grading on almost identical qualifications. It’s not a big deal because we just replaced one of the cards and carried on with the game. I would just like to see a little less overlap in these cards.

Robottery 101 is a colorful game that’s really playful and fun. The mechanics are solid enough for adults while the theme of building a giant robot will definitely appeal to kids. Robottery 101 has been funded through Kickstarter and their campaign runs through August 6, 2017. If you love robots and fun filler games, you should definitely check out Robottery 101 today.

Michelle Olsen provided us with a prototype copy of Robottery 101 during the Kickstarter campaign. This in no way influenced our opinion on the game. Previews are a glimpse into an upcoming game with the pros and cons that we experienced prior to production of the game.