There’s just something about a castle or fortress that’s so intriguing. Developing your own little kingdom, fighting to take down an opponent from behind your fortified walls… you feel like such a hero. I mean, how cool were those scenes in The Two Towers as they were fighting to protect their fortress?

I mean, do you remember these things? 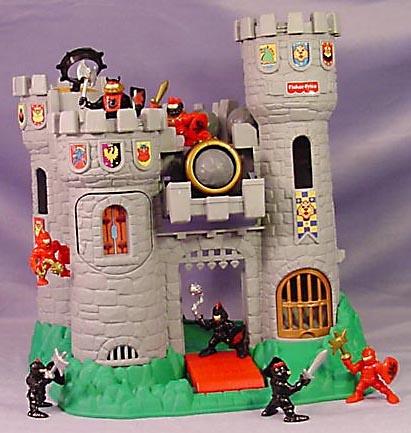 My little brother had one of these things when we were growing up, and it quickly became the central hub when we played with our toys. You know your imagination’s running wild when the Yellow Ranger is manning the cannon with Leonardo. And since we only had one, we often had to build the opposing castle out of Legos or something else, and then we would launch stuff at each other, hoping to destroy the other person’s kingdom first.

Shaolia: Warring States from Bad Comet Games gives you a bit of that rush in board game form. And while you might not find your favorite toys from childhood represented here, you will find an incredibly well-made game that has enough variety to keep you coming back for round after round of head-to-head battles.

A Kingdom of Your Very Own!

Shaolia is primarily a two-player game in which each person develops a kingdom of their own round by round by purchasing, building, and using a variety of buildings. These buildings provide a variety of resources that will help you in your quest to either destroy your opponent’s castle, or to develop a certain level of culture before they do.

The game is played over a series of rounds that all take the same form – buying, building, and actions. The buying phases mostly centers around the building cards, which are split into two different levels. Level 1 cards can be purchased with gold, while more powerful Level 2 cards must be purchased using other building cards. You can also acquire other resources during this phase that will help you in the other parts of the round.

Once you’ve made your purchases, you can construct your buildings on your individual player mat. Each building has a cost, with the more basic being cheaper and the monster huge buildings costing quite a bit. You start out with six open spaces, but you can pay money to later open up more room for your empire.

Finally, you will take your actions. This process occurs when the dice represented on a building card are matched by three dice that you roll at the beginning of the phase.

This is where the buildings really show their strength. The six building types allow you to do a variety of things, such as acquire more gold or minerals (which are used to build higher level buildings), add to your culture score, defend your castle, or attack your enemy. You can even go trade at the market, which lets you spend or obtain money in different ways depending on the setup of the game. The higher level buildings get more powerful, but they have higher costs, so you have to manage your resources well to make your kingdom more powerful.

And that’s it! Players continue to go back and forth until their culture level or attacks earn them the crown of victory.

“All This Will Be Yours!” “What, the Curtains?”

What you’ll initially notice about Shaolia is how well-made it is. Every single component shows great care and precision. No, it’s not a bunch of miniatures or something like that, but instead a bunch of very well-illustrated components that lend tremendously to the theme.

Within the six different types of buildings, there are different levels of cards that are more powerful or have different attributes. The art does a great job of helping you see what’s more powerful. A school, for instance, is a simple building with a jade roof, but one of the more powerful versions of that type of a building – a garden – shares that same jade roof but is larger and more ornate. This type of attention to detail shows care for the experience of the players that sometimes goes unnoticed.

Other components help to really sell the theme and get the players engaged in the battle. There’s a cool starting player flag that rotates back and forth each round. The coins and gems are fairly standard but they do the job, and there are some interesting little minis that stand in as workers that will help you adjust dice rolls during the game. All in all, there is some great stuff in this box that I think will satisfy anyone who purchases it.

My Kingdom For a Horse… or a Mine

The rulebook of Shaolia comes with six different scenarios, each of which is tailored to a particular playing style. They are differentiated by the types of buildings that are available for purchase, as well as the presence of other factors, like character cards and starting money.

I found the introductory style way too easy and our match ended way too fast, but our other games were great. Ryan and I played a variant that provides you with a powerful building right at the beginning of the game. This gives you something to work towards in your early turns, but it also allows your opponent to prepare to destroy it instead of being taken by surprise. We had a great time fighting each other, and the two games we played really came down to the wire.

I still need to play through some of the scenarios, but I can already tell that great time and effort has gone into ensuring that these gameplay experiences are pretty well-balanced. I think that the designers have worked diligently on the mechanics of this game, and it has paid off.

The Sun Never Sets on My Empire

From the second I opened the box, I was blown away by Shaolia. The components are just so nice – it’s easily one of the most well-made games I’ve ever previewed. And each time I play Shaolia, I find more and more to love. The rulebook is well done and clearly explains the details of the game. The many scenarios that have been written show that the designers want you to have a good time with what they have made. They even sent me an extra one to try out while we were playtesting! That’s not to mention the 2 v 2 version that I haven’t even touched yet.

So how would I summarize Shaolia, and to whom would I recommend it? Well, I think a lot of people will like this game. I feel like it has a feeling at times of a two-player deck builder like Hero Realms but more streamlined. I feel like it has some strategic wargame elements but at a much more approachable level. I mean, if I’m being honest, I think a lot of people who just enjoy a straightforward competition against another person can find something to like in Shaolia. And if the 2 v 2 works as well as the 1 v 1, then even more people can get in on the action.

Basically, this game gets a recommendation from me that’s on the level of PARKS or Fire in the Library – if you’ve got the cash, and you’ve got any interest whatsoever, you should get your hands on this game. The great components, solid gameplay, and superb variety will ensure that you will have several epic battles for years to come.

Even your dog will want to play.

You can check out the Kickstarter for Shaolia: Warring States beginning June 5th.

Bad Comet Games provided us with a prototype copy of Shaolia: Warring States prior to the Kickstarter campaign. This in no way influenced our opinion of the game. Previews are a glimpse into an upcoming game with the pros and cons that we experienced prior to production of the game.